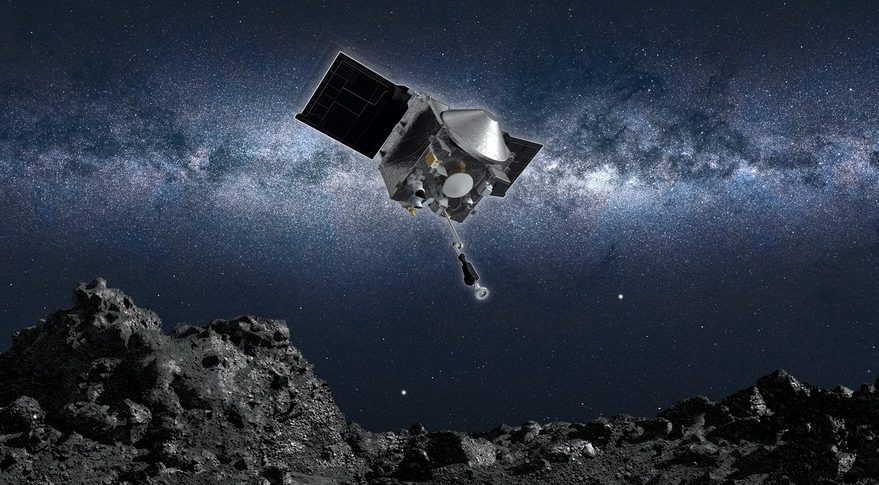 Almost four years later of its launch on 8th September 2016, NASA’s spacecraft, OSIRIs-REx has reached the asteroid, Bennu, on 20th October 2020. On 22nd September, the mission team has received information from the spacecraft. The information includes pictures which show that the craft has collected enough sample. The main objective of this craft was to collect 2 ounces or 60 grams of samples from the surface of the asteroid. The spacecraft sent pictures showing the head of the sample collector. By looking at the pictures, the mission team has come to know that it is full and some of the samples seem to be leaking out because of the wedging of doors by the larger rocky particles. The sample collector uses a Touch and Go Sample Acquisition Mechanism or TAGSAM technology.

“Bennu continues to surprise us with great science and also throwing a few curveballs. And although we have to move quickly to stow the sample, it’s not a bad problem to have. We are so excited to see what appears to be an abundant sample that will inspire science for decades beyond this historic moment,” says NASA’s associate administrator for science at the HQ in Washington.

The images that have been sent by the spacecraft show that even the slightest movement will cause the loss of more samples. So, the team has decided to do the Sample Mass Measurement which was otherwise scheduled for 24th October. They have also decided to minimize the acceleration of the craft by canceling a braking burn. Currently, the team’s main focus is on stowing the sample in the Sample Return Capsule (SRC) back to Earth for further examination.

Dante Lauretta, who leads the mission in scientific observation and planning, says, “We are working to keep up with our own success here, and my job is to safely as large a sample of Bennu as possible. The loss of mass is of concern to me, so I’m strongly encouraging the team to stow this precious sample as quickly as possible.”

By the data received by the team, they are able to conclude that, the TAGSAM was flush with the surface material as it was able to dig into the surface of the asteroid, and now, it holds more than the required amount of sample in its possession. There does not seem to be any damage to the space vehicle. The team is currently trying to work out the dates for the transportation of these samples back to Earth.