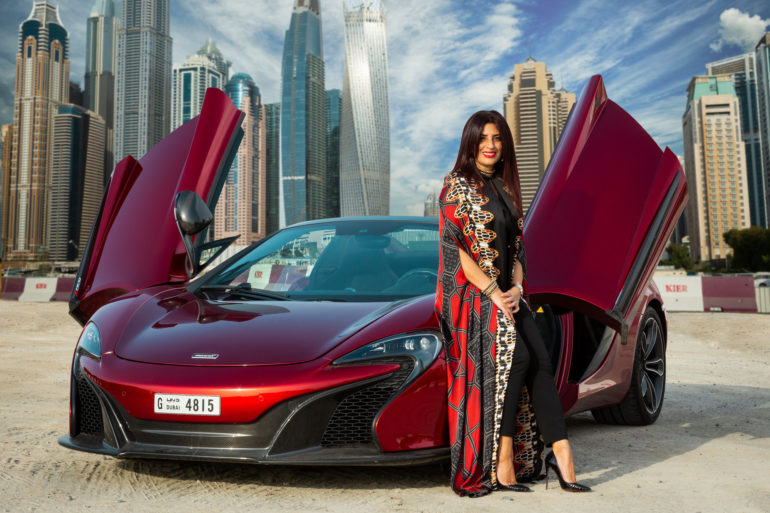 Someday I hope to have a beautiful fast car, just like the one shown in the picture and to be a future Arabian Gazelle. However, the only common similarity between the perception of the photo and reality of my life is that startups are all about being in the fast lane. My entrepreneurial journey is not as glamorous But I wouldn’t trade it with anything else. It involves late nights, blood, sweat, and tears. Because that’s what it takes to grow a successful global company. It’s good to have dreams and aspirations and every time I hear a roaring engine go past I think…yes someday.

In 2018 we launched an AI, video interview service called Searchie. As a woman, I had faced many challenges during my career and once was told that my male counterpart would get the promotion not me, as people would respect him more. That was over 25 years ago, yet many discriminations still exist during the hiring process. The reasons can be far-reaching and unfair: “You’re too young, too old, a woman, a mother, a man, underqualified, overqualified, didn’t attend a certain University and the list goes on.

Our aim at Searchie is simple:

Give people a chance! By creating a process focused on competencies, personality and skills, not just the latter. If people are happy in their job, they will work with passion and dedication. Our AI engine interviews every person by virtual video in exactly the same way. This in itself reduces unconscious bias and increases diversity. From then the employers take over the process and continue and it saves peoples CVs being lost in the system.

The virus quickly escalated to a medical pandemic in just a few weeks and the economic consequences began to ravage industries across the world. People were dying from the virus and to make things even worse, 305 million people are predicted to lose their source of income, affecting their families and loved ones!

My reaction was immediate, I decided that we needed to do something to help with the loss of life. As a woman leader I am different and embracing the emotional side in business is not something to hide, it helps me build products in a different way. I feel the pain and it moves me to act fast.

While on a call to a friend, I realized that there is a lot of overlap between job interviews and medical triage.

In an interview, a recruiter will ask lots of people the same or similar questions, over and over, to build an understanding of how well they match what the recruiter is looking for. In recruitment, we call these signals skills, experience, and traits.

In triage, a nurse or doctor will ask lots of people the same or similar questions, over and over, to build an understanding of how they match to the illness they are looking for. In medicine, we call these signals symptoms.

The next morning I briefed the team on the idea to repurpose our video interview tools for nurses and doctors to virtually triage patients and they were excited and committed to making it a reality. We launched on 2nd April 2020 and we were in the market. By May we had our first customer and in July we signed our first multi million dollar contract and are in several countries.

Today, our virtual triage product, called Mediscreen, includes virtual video triages with patients, AI that measures heart rate and respiration rate, and a fully customizable triage for doctors to design their own triage questions from cardiac to diabetes. We have partnered with Heartfelt in the US who have over 20 years of screening expertise and this has accelerated our growth plans. We have over 20 partners globally who are selling our solutions into governments, employers, airlines, airports, hospitality, retail, education sectors. It has an incredible amount of uses.

As countries started to look at reopening it also became apparent that remote working and remote triage methods are here to stay. Our software is complemented by Zoom and video conferencing tools as a next step. Mediscreen can help employers with getting back to work safely and putting safety protocols in place to ensure staff health and well being. Some businesses shut down 2 days after opening, as measures were not put in place. Mediscreen was suddenly useful in more ways than we could imagine. The beauty of being an entrepreneur is the infinite ability to think as big as you want, without the limits placed on you by any structure of belief.

Everyone has untapped potential, but sadly some will never be able to bring that out, as they don’t get a chance, companies need to take diversity seriously and give everyone a chance. “Talent is evenly distributed but opportunity is not” – Leilah Janah.

Women founders still receive less than 3% of all VC funding, there are not enough women CEOs, leaders, board members, it’s a male-dominated world. We also have to juggle being a mother during our career. If I had been in the corporate world, I would’ve struggled – the lack of flexibility would’ve driven me out, it has been a system which forces women to choose between a career or being a mother. Hopefully, COVID-19 has bought in a changed mindset with many companies offering flexible remote working, this will stay, It allows equality, no one gender is more important, it’s about increasing the numbers to make it a level playing field. Innovation is created when people think differently, not the same. Embracing this mindset is game-changing and the journey has been hard. It’s not for the faint-hearted, at times it’s almost broken me.

I truly believe everyone has the potential to be more than they are if they are given the right conditions. Being fearless requires courage and self-belief. It’s about taking calculated risks and pivoting into healthcare certainly paid off. The biggest lesson through our Coronavirus journey has been to pivot at speed. I am obsessed and stubborn with my vision, I won’t stop until I achieve my mission. Does that make me a diva in business? Yes, I suppose it does.

Here’s to changing the way people live and work….forever.